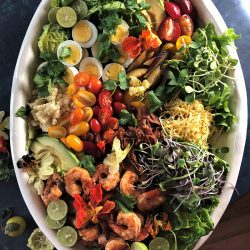 This Southwestern Grilled Shrimp Cobb Salad is a kicked up spin on an old classic. A few simple ingredient swaps, along with a zesty marinade for the shrimp and a creamy Buttermilk Chipotle Dressing, and this one-platter-is-a-meal comes together quickly. What a great way to celebrate with the bounty of late summer!

Prepare the marinade: Combine all ingredients in a mixing bowl. Add shrimp and toss to coat. Cover and refrigerate, up to one hour, while you prepare the other ingredients.

Prepare the Buttermilk Chipotle Dressing:  Place all ingredients except the cilantro in the bowl of a food processor. Pulse to chop, then process until creamy. Add the cilantro and pulse several times to chop roughly. Transfer to a glass jar with a lid and refrigerate until  you are ready to serve.

Grill the shrimp: Drain any excess marinade from the shrimp and grill over high heat for 2 – 3 minutes per side. Transfer to a plate and reserve until cooled.

Assemble the salad: Once the shrimp is cool enough to not wilt your salad, compose the salad using all the main ingredients, with an eye toward color and textures.  Arrange the garnishes on top. If you are serving later, reserve the bacon and crispy topping until serving time. Cover and refrigerate.

To serve: Add the bacon and crispy topping and serve with the Buttermilk Chipotle Dressing.

Crunchy toppers: there are a lot of different crunchy toppers available in the crouton section these days. I used the fried jalapeno slices, but you will also find the basic fried onion rings, as well as red peppers, tortillas and more. Chef’s choice.

We use cookies to ensure that we give you the best experience on our website. If you continue to use this site we will assume that you are happy with it.Ok