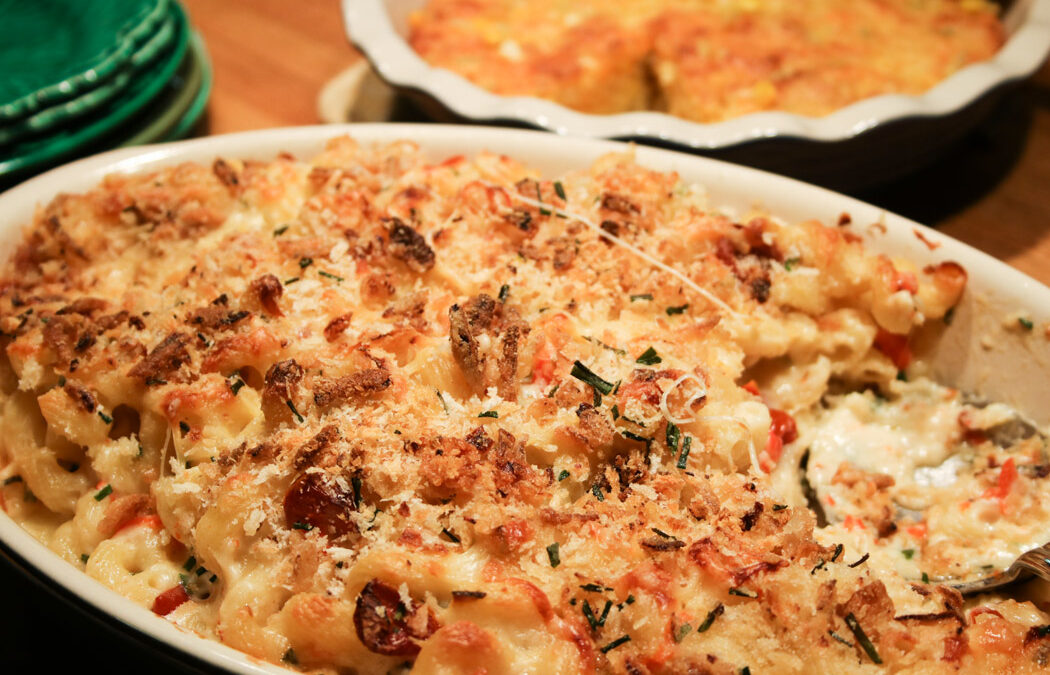 After that fantastic morning cutting the cheese with the Cheese Lady (LadieS, original and 2.0), I wanted, no needed, to drill down on the “recipe cheeses” that Shelley was going on about.  Yes, I do like to cook with cheese, but I also couldn’t be happier with a big spread, especially if there are raw milks in the mix.   But after sharing my insights into the featured “recipe” cheeses in my last post, I turned around, drove back and bought even more, just for cooking.  Mac & Cheese seemed like an easy and simple go to idea, but as you are probably noticing, I’m not one to let well enough alone.  Okay, that’s not 100% true – I pendulum-swing from letting stellar ingredients shine (less is more) way across to an insane amount of add-ons (more is more).  Have you already forgotten the Everything but the Farmer Farmer’s Market Salad? I rest my case.  I’m sure there are good pharmaceuticals for this split personality, but I choose to go it alone and see what boils over each day’s pot.

So this recipe is part Mac & Cheese 101 – including classic French béchamel technique – and part KMG – Katy Goes Mad …in this case, for Pimento Cheese.  Two big drivers here: The Cheese Lady Muskegon sometimes has Zingerman’s Pimento Cheese.  At the risk of telling you about it and creating a run on the stuff, it’s divine.  The second is dear ole Dad.  I think pimento cheese sandwiches were a staple his mother made – Grandmother Keck was quite the cook in the farm-girl-vegetable-soup-and-applesauce-by-the-vat-load-sort-of-way.  Whatever his inspiration, he was super fond of the spread and, like me sourcing out the goods from Zingerman’s, he had his haunts.  (I hate to admit that it was a Stuckey’s gas station on the highway south of Terre Haute….let’s just say this apple rolled a few acres after falling from that tree.)  The notion of his love for “pimenna”, as he more or less Hoosier twanged it, lives on, and it wouldn’t be unheard of to find it served at an engagement party or stuffed on whole wheat and into your Christmas stocking – not because you’re dying for it but because it needs to be there.  It’s the right thing to do.  Some things you just don’t question.

There’s one more reason I’m keen to dose the mac & cheese in the southern way – a recent trip to Atlanta, trend-spotting for a client, had me in awe of the many uses of pimento cheese.  From apps almost to dessert, I was hard pressed to find a joint without the ubiquitous spread in the 13 restaurants I visited in 36 hours.  It was some kind of heaven and I’m sure my Pop was sitting nearby, somewhere on the right hand.

For the basics: The start to any classic flour-based sauce is a roux – equal parts flour and butter (or in the case of gravy, flour and meat or bird fat), generally used in equal portions.  It’s always important to toast the flour, once the two are whisked together. That is what gives the sauce a cooked, somewhat nutty taste.  For those that thicken pan drippings by whisking in flour at the end, there will always be a slightly raw flour taste.  The longer you toast the roux, the deeper the color and flavor. Some gumbos will have it go all the way to a deep rich dark color.  But Mac & Cheese is based on a white sauce, so for this the roux, we will only toast it until it just starts to bubble – about a minute or so.

No Shame in Measuring

I can eyeball proportions pretty well and often don’t measure but there is some chemistry at work here and there is no shame in measuring.  A little precision will help ensure success.  When making gravy at Thanksgiving, even I pour off all the pan drippings to see how much is fat and how much is broth – stay tuned for a Fall drill down on that.  In a flat roasting pan, it’s damn hard to tell the ratio – pretty easy in a glass measuring cup when the fat floats.

The key proportions for a sauce of average thickness are:

Mac & Cheese is generally started with a white sauce or Béchamel.   There you are speaking French again. You’re welcome!  The addition of cheeses to this blond roux-thickened base turns Béchamel to Mornay.   Add crayfish and you have Nantua Sauce.  Sautéed Onions makes Soubise.   And  you can probably guess what makes Béchamel into Mustard Sauce.  FYI, Bechamel is one of three of the five mother sauces that uses roux – so pay attention here!  1 T to 1 T to 1 Cup!

For a pound of pasta, you will need 3 to 4 cups of sauce.  I make a mean turkey tetrazzini that uses spaghetti (not such a clingy noodle) and it seems to soak up about 3 cups of sauce.  Since you are adding cheese to further thicken this sauce, I find Mac & Cheese with a curly, needy noodle like cavatappi will absorb closer to 4 cups. (Better safe than sorry – err on the “make-too-much” side).  So who’s doing the math here? 4 Tablespoons (1/4 cup) butter, 4 T flour, 1 quart of milk.

After you finish the sauce, stir in grated cheese(s).  I’m not bothered by the color here and chose white cheeses (high quality, of course: Fontina Fontal for its creaminess and ability to hold a sauce and Barber’s Cheddar for its edge).  I realize that some of you can’t get over needing the bright yellow – but for the love of God, please use a quality yellow cheddar.  Did you see that Kraft recently did the world’s biggest blind taste test?  Assuming that fans would complain when they took out some dyes and non-natural additives, they secretly made the switch without changing the packaging (except ingredient list) and way ahead of schedule. Nobody noticed.  I did feel pretty much affirmed on my comment last month that commercially produced turmeric “tasted – well, yellow” because Kraft used it in lieu of yellow dyes 5 and 6.  I can promise you if the turmeric had tasted like ginger, as intended, someone would have noticed!  But the unspoken fact still remains – even though these additives are so called natural, they are not natural to cheese.   There is nothing wrong with a white sauce with white cheeses! 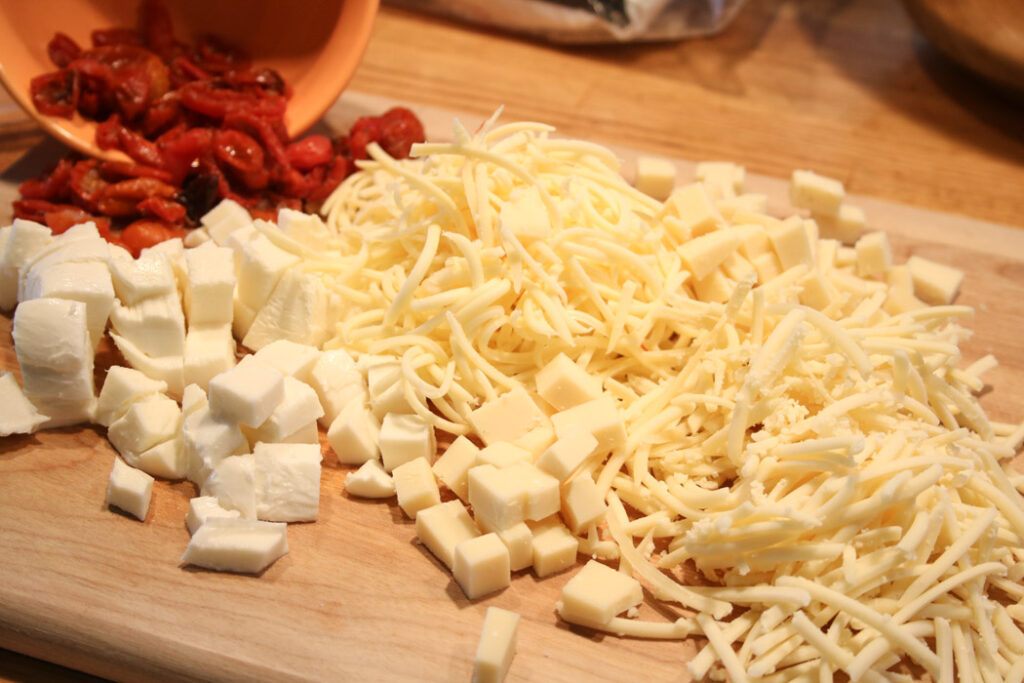 The other thing I like to do with the cheeses is grate some and cube the rest so you get pockets of cheesy goodness that melt and string as you pull.  If you don’t like that (seriously, WHAT IS WRONG WITH YOU?), then either chop the cheeses more finely, or grate them all.  With any of the grated cheeses, use a coarse grater.  If you grate too finely (think green shakers of wood pulp/cellulose), the cheese “dust” won’t melt well and will cause the sauce to be a bit gritty. Nobody likes that!  If you are using a variety of flavors like I am – or even more distinctive flavors, like a blue or pepper cheese….or  blue with pepper (yes! Glacier Wildfire Blue!!!) – it’s really important to add the cheeses separately from the sauce so you get the distinct pops of flavor.  If you only added them to the sauce, it would be a blended flavor and the strongest cheese wins.  Not the goal! Layer! Layer! Layer!

I’m starting you out with the basics here and including the southern twist, but there are plenty of other ways to jack your mac, and I’ll ‘bring it’ in the future.

Melt the butter and whisk in the flour to make a roux, the texture of wet sand.  Let it start to bubble and continue for one minute.  Whisk in the milk and combine well.  Add the salt and red pepper flakes.  Simmer for 10 to 15 minutes until thickened, whisking from time to time to make sure the bottom does not stick.  Add handfuls of the 2 cups of grated cheese and stir until melted.

Meanwhile cook the pasta according to package directions in salted boiling water, stopping about two minutes early.  Drain and transfer to a mixing bowl.

Pour the cheese sauce over the warm pasta, using about ¾ quarters of the sauce to start.  Stir until combined, adding additional sauce as desired. (You will likely want it all).  Add the You’ll Thank Me in the Winter Oven Dried Tomatoes, peppadew and 2 Tablespoons of chives.

Transfer 3 cups of the sauced pasta to a buttered 3-quart casserole dish.  Layer 1/3 of the remaining cheeses (the grated fontina, grated and chopped gruyere, and chopped mozzarella). Repeat with two more layers of pasta and cheese until all are used, ending with the cheeses.

Combine remaining Tablespoon of chopped chives, panko and fried onion topping in a small bowl. Sprinkle on top of the pasta and dot with butter.

Bake the assembled macaroni and cheese for 30-40 minutes until bubbly.  Raise oven temperature to 450oF and bake an additional 7 to 10 minutes until top crisps up. 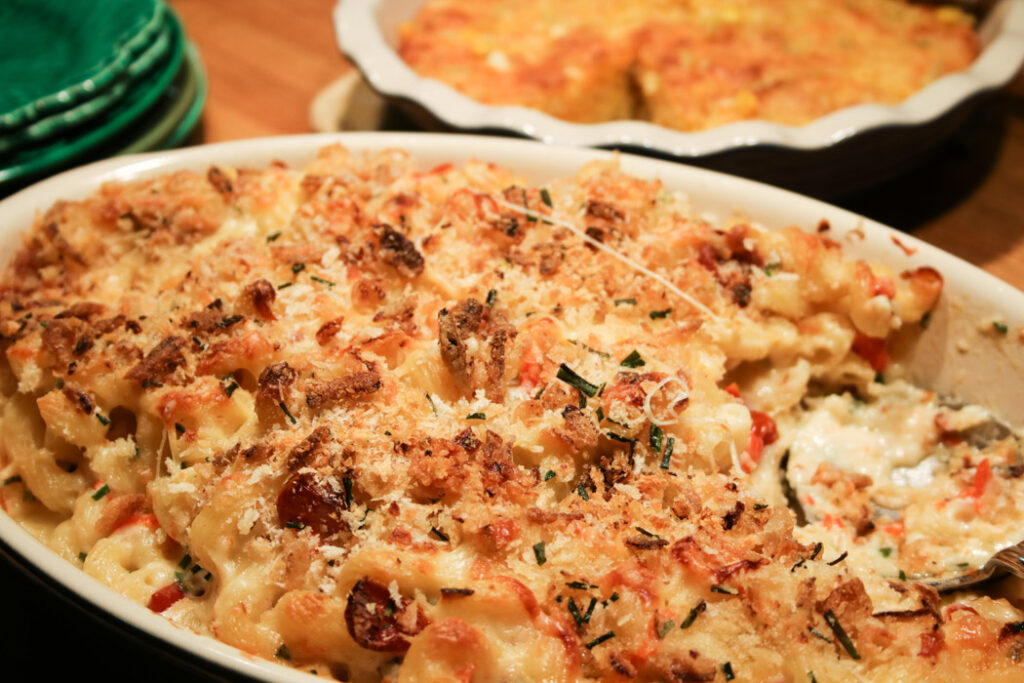